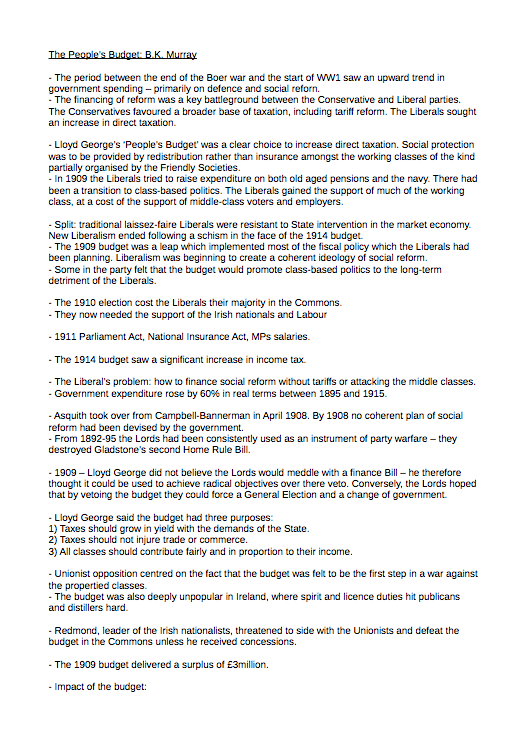 ⇒- The period between the end of the Boer war and the start of WW1 saw an upward trend in government spending – primarily on defence and social reforn. - The financing of reform was a key battleground between the Conservative and Liberal parties. The Conservatives favoured a broader base of taxation, including tariff reform. The Liberals sought an increase in direct taxation. - Lloyd George’s ‘People’s Budget’ was a clear choice to increase direct taxation. Social protection was to be provided by redistribution rather than insurance amongst the working classes of the kind partially organised by the Friendly Societies. - In 1909 the Liberals tried to raise expenditure on both old aged pensions and the navy. There had been a transition to class-based politics. The Liberals gained the support of much of the working class, at a cost of the support of middle-class voters and employers. - Split: traditional laissez-faire Liberals were resistant to State intervention in the market economy. New Liberalism ended following a schism in the face of the 1914 budget. - The 1909 budget was a leap which implemented most of the fiscal policy which the Liberals had been planning. Liberalism was beginning to create a coherent ideology of social reform. - Some in the party felt that the budget would promote class-based politics to the long-term detriment of the Liberals. - The 1910 election cost the Liberals their majority in the Commons. - They now needed the support of the Irish nationals and Labour - 1911 Parliament Act, National Insurance Act, MPs salaries. - The 1914 budget saw a significant increase in income tax. - The Liberal’s problem: how to finance social reform without tariffs or attacking the middle classes. - Government expenditure rose by 60% in real terms between 1895 and 1915. - Asquith took over from Campbell-Bannerman in April 1908. By 1908 no coherent plan of social reform had been devised by the government. - From 1892-95 the Lords had been consistently used as an instrument of party warfare – they destroyed Gladstone’s second Home Rule Bill. - 1909 – Lloyd George did not believe the Lords would meddle with a finance Bill – he therefore thought it could be used to achieve radical objectives over there veto. Conversely, the Lords hoped that by vetoing the budget they could force a General Election and a change of government. - Lloyd George said the budget had three purposes: 1) Taxes should grow in yield with the demands of the State. 2) Taxes should not injure trade or commerce. 3) All classes should contribute fairly and in proportion to their income. - Unionist opposition centred on the fact that the budget was felt to be the first step in a war against the propertied classes. - The budget was also deeply unpopular in Ireland, where spirit and licence duties hit publicans and distillers hard. - Redmond, leader of the Irish nationalists, threatened to side with the Unionists and defeat the budget in the Commons unless he received concessions. - The 1909 budget delivered a surplus of £3million. - Impact of the budget:

These notes cover the topic of 20th Century Britain in politics. Included within this package are notes on Liberal Government in 1905, Thatcherism, the conservatives and mass democracy, the politics of affluence, the rise of the labour party, and the work of the Attlee government.