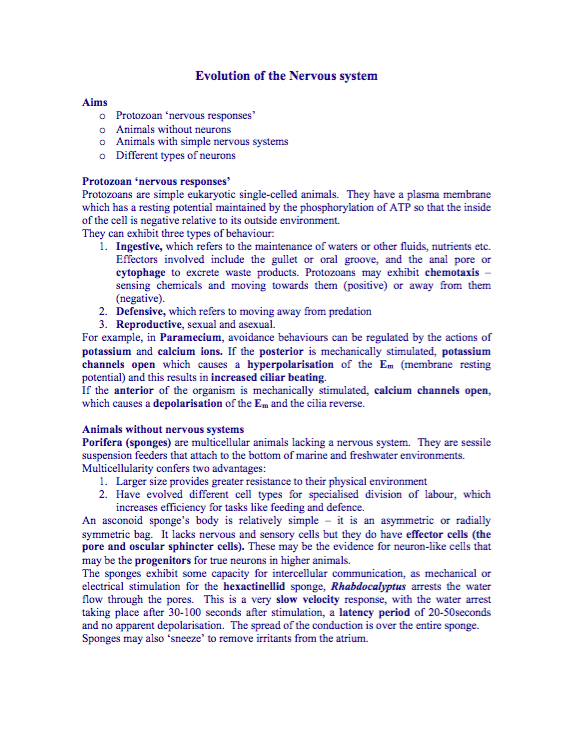 Evolution of the Nervous System

⇒ Aims o Protozoan ‘nervous responses’ o Animals without neurons o Animals with simple nervous systems o Different types of neurons Protozoan ‘nervous responses’ Protozoans are simple eukaryotic single-celled animals. They have a plasma membrane which has a resting potential maintained by the phosphorylation of ATP so that the inside of the cell is negative relative to its outside environment. They can exhibit three types of behaviour: 1. Ingestive, which refers to the maintenance of waters or other fluids, nutrients etc. Effectors involved include the gullet or oral groove, and the anal pore or cytophage to excrete waste products. Protozoans may exhibit chemotaxis – sensing chemicals and moving towards them (positive) or away from them (negative). 2. Defensive, which refers to moving away from predation 3. Reproductive, sexual and asexual. For example, in Paramecium, avoidance behaviours can be regulated by the actions of potassium and calcium ions. If the posterior is mechanically stimulated, potassium channels open which causes a hyperpolarisation of the Em (membrane resting potential) and this results in increased ciliar beating. If the anterior of the organism is mechanically stimulated, calcium channels open, which causes a depolarisation of the Em and the cilia reverse. Animals without nervous systems Porifera (sponges) are multicellular animals lacking a nervous system. They are sessile suspension feeders that attach to the bottom of marine and freshwater environments. Multicellularity confers two advantages: 1. Larger size provides greater resistance to their physical environment 2. Have evolved different cell types for specialised division of labour, which increases efficiency for tasks like feeding and defence. An asconoid sponge’s body is relatively simple – it is an asymmetric or radially symmetric bag. It lacks nervous and sensory cells but they do have effector cells (the pore and oscular sphincter cells). These may be the evidence for neuron-like cells that may be the progenitors for true neurons in higher animals. The sponges exhibit some capacity for intercellular communication, as mechanical or electrical stimulation for the hexactinellid sponge, Rhabdocalyptus arrests the water flow through the pores. This is a very slow velocity response, with the water arrest taking place after 30-100 seconds after stimulation, a latency period of 20-50seconds and no apparent depolarisation. The spread of the conduction is over the entire sponge. Sponges may also ‘sneeze’ to remove irritants from the atrium.

Notes taken and written up by the student from the 2nd year undergraduate module 'Behavioural neurobiology' at the University of Manchester. The notes cover a range of subjects including the history of studying behaviour, courtship sexual behaviours in the rat and ring dove, bat echolocation, navigation and migration and the neurobiology of central pattern generators and proprioceptive feedback. Most of the notes contain diagrams for visualisation of concepts and ideas.