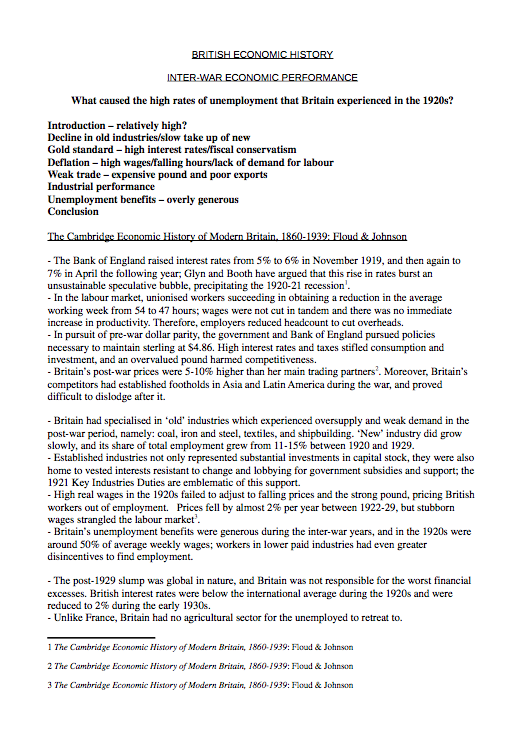 ⇒ What caused the high rates of unemployment that Britain experienced in the 1920s? Introduction – relatively high? Decline in old industries/slow take up of new Gold standard – high interest rates/fiscal conservatism Deflation – high wages/falling hours/lack of demand for labour Weak trade – expensive pound and poor exports Industrial performance Unemployment benefits – overly generous Conclusion The Cambridge Economic History of Modern Britain, 1860­1939: Floud & Johnson ­ The Bank of England raised interest rates from 5% to 6% in November 1919, and then again to 7% in April the following year; Glyn and Booth have argued that this rise in rates burst an unsustainable speculative bubble, precipitating the 1920­21 recession1 . ­ In the labour market, unionised workers succeeding in obtaining a reduction in the average working week from 54 to 47 hours; wages were not cut in tandem and there was no immediate increase in productivity. Therefore, employers reduced headcount to cut overheads. ­ In pursuit of pre­war dollar parity, the government and Bank of England pursued policies necessary to maintain sterling at $4.86. High interest rates and taxes stifled consumption and investment, and an overvalued pound harmed competitiveness. ­ Britain’s post­war prices were 5­10% higher than her main trading partners2 . Moreover, Britain’s competitors had established footholds in Asia and Latin America during the war, and proved difficult to dislodge after it. ­ Britain had specialised in ‘old’ industries which experienced oversupply and weak demand in the post­war period, namely: coal, iron and steel, textiles, and shipbuilding. ‘New’ industry did grow slowly, and its share of total employment grew from 11­15% between 1920 and 1929. ­ Established industries not only represented substantial investments in capital stock, they were also home to vested interests resistant to change and lobbying for government subsidies and support; the 1921 Key Industries Duties are emblematic of this support. ­ High real wages in the 1920s failed to adjust to falling prices and the strong pound, pricing British workers out of employment. Prices fell by almost 2% per year between 1922­29, but stubborn wages strangled the labour market3 . ­ Britain’s unemployment benefits were generous during the inter­war years, and in the 1920s were around 50% of average weekly wages; workers in lower paid industries had even greater disincentives to find employment. ­ The post­1929 slump was global in nature, and Britain was not responsible for the worst financial excesses. British interest rates were below the international average during the 1920s and were reduced to 2% during the early 1930s. ­ Unlike France, Britain had no agricultural sector for the unemployed to retreat to.

Study of Britain's economic performance in comparative context with the US, Germany, and France, with particular reference to quantitative data.