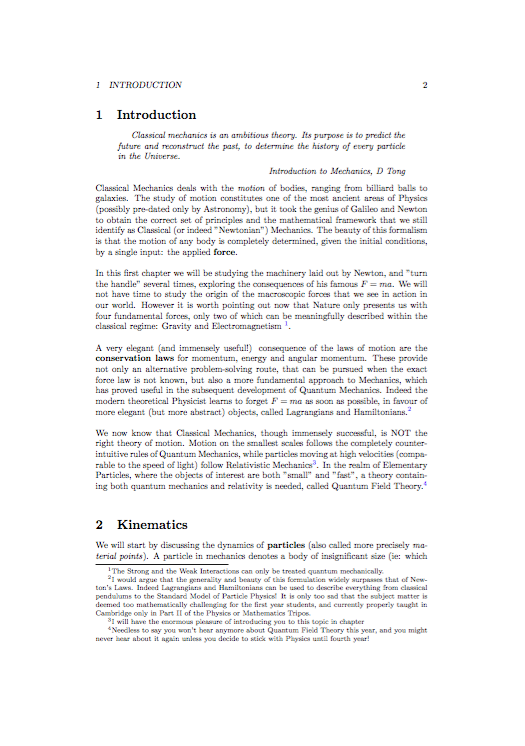 ⇒ Classical mechanics is an ambitious theory. Its purpose is to predict the future and reconstruct the past, to determine the history of every particle in the Universe. Introduction to Mechanics, D Tong Classical Mechanics deals with the motion of bodies, ranging from billiard balls to galaxies. The study of motion constitutes one of the most ancient areas of Physics (possibly pre-dated only by Astronomy), but it took the genius of Galileo and Newton to obtain the correct set of principles and the mathematical framework that we still identify as Classical (or indeed ”Newtonian”) Mechanics. The beauty of this formalism is that the motion of any body is completely determined, given the initial conditions, by a single input: the applied force. In this first chapter we will be studying the machinery laid out by Newton, and ”turn the handle” several times, exploring the consequences of his famous F = ma. We will not have time to study the origin of the macroscopic forces that we see in action in our world. However it is worth pointing out now that Nature only presents us with four fundamental forces, only two of which can be meaningfully described within the classical regime: Gravity and Electromagnetism 1. A very elegant (and immensely useful!) consequence of the laws of motion are the conservation laws for momentum, energy and angular momentum. These provide not only an alternative problem-solving route, that can be pursued when the exact force law is not known, but also a more fundamental approach to Mechanics, which has proved useful in the subsequent development of Quantum Mechanics. Indeed the modern theoretical Physicist learns to forget F = ma as soon as possible, in favour of more elegant (but more abstract) objects, called Lagrangians and Hamiltonians.2 We now know that Classical Mechanics, though immensely successful, is NOT the right theory of motion. Motion on the smallest scales follows the completely counter- intuitive rules of Quantum Mechanics, while particles moving at high velocities (compa- rable to the speed of light) follow Relativistic Mechanics3. In the realm of Elementary Particles, where the objects of interest are both ”small” and ”fast”, a theory contain- ing both quantum mechanics and relativity is needed, called Quantum Field Theory.4 2 Kinematics We will start by discussing the dynamics of particles (also called more precisely ma- terial points). A particle in mechanics denotes a body of insignificant size (ie: which

These notes have been written as support for tutorials I give to Cambridge undergraduate students. They cover the content of about 12 lectures in Classical Mechanics given to all First year Cambridge Physics students. The notes are updated to the current Cambridge syllabus (2014).