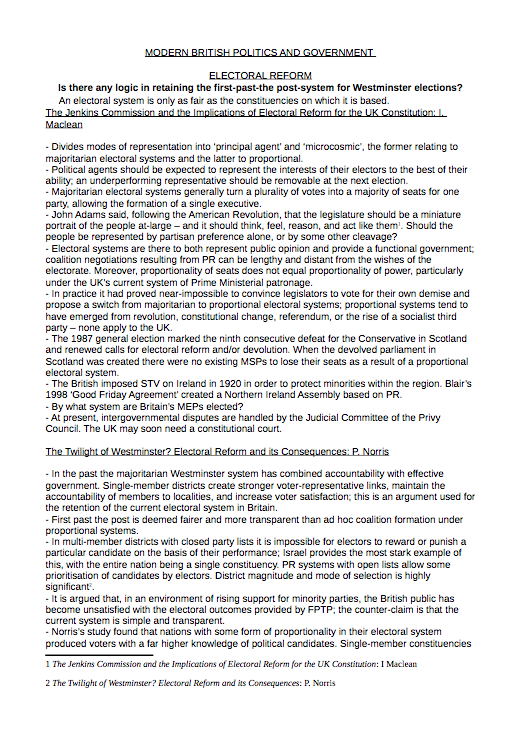 ⇒ Is there any logic in retaining the first-past-the post-system for Westminster elections? An electoral system is only as fair as the constituencies on which it is based. The Jenkins Commission and the Implications of Electoral Reform for the UK Constitution: I. Maclean - Divides modes of representation into ‘principal agent’ and ‘microcosmic’, the former relating to majoritarian electoral systems and the latter to proportional. - Political agents should be expected to represent the interests of their electors to the best of their ability; an underperforming representative should be removable at the next election. - Majoritarian electoral systems generally turn a plurality of votes into a majority of seats for one party, allowing the formation of a single executive. - John Adams said, following the American Revolution, that the legislature should be a miniature portrait of the people at-large – and it should think, feel, reason, and act like them1 . Should the people be represented by partisan preference alone, or by some other cleavage? - Electoral systems are there to both represent public opinion and provide a functional government; coalition negotiations resulting from PR can be lengthy and distant from the wishes of the electorate. Moreover, proportionality of seats does not equal proportionality of power, particularly under the UK’s current system of Prime Ministerial patronage. - In practice it had proved near-impossible to convince legislators to vote for their own demise and propose a switch from majoritarian to proportional electoral systems; proportional systems tend to have emerged from revolution, constitutional change, referendum, or the rise of a socialist third party – none apply to the UK. - The 1987 general election marked the ninth consecutive defeat for the Conservative in Scotland and renewed calls for electoral reform and/or devolution. When the devolved parliament in Scotland was created there were no existing MSPs to lose their seats as a result of a proportional electoral system. - The British imposed STV on Ireland in 1920 in order to protect minorities within the region. Blair’s 1998 ‘Good Friday Agreement’ created a Northern Ireland Assembly based on PR. - By what system are Britain’s MEPs elected? - At present, intergovernmental disputes are handled by the Judicial Committee of the Privy Council. The UK may soon need a constitutional court. The Twilight of Westminster? Electoral Reform and its Consequences: P. Norris - In the past the majoritarian Westminster system has combined accountability with effective government. Single-member districts create stronger voter-representative links, maintain the accountability of members to localities, and increase voter satisfaction; this is an argument used for the retention of the current electoral system in Britain. - First past the post is deemed fairer and more transparent than ad hoc coalition formation under proportional systems. - In multi-member districts with closed party lists it is impossible for electors to reward or punish a particular candidate on the basis of their performance; Israel provides the most stark example of this, with the entire nation being a single constituency. PR systems with open lists allow some prioritisation of candidates by electors. District magnitude and mode of selection is highly significant2 . - It is argued that, in an environment of rising support for minority parties, the British public has become unsatisfied with the electoral outcomes provided by FPTP; the counter-claim is that the current system is simple and transparent. - Norris’s study found that nations with some form of proportionality in their electoral system produced voters with a far higher knowledge of political candidates. Single-member constituencies