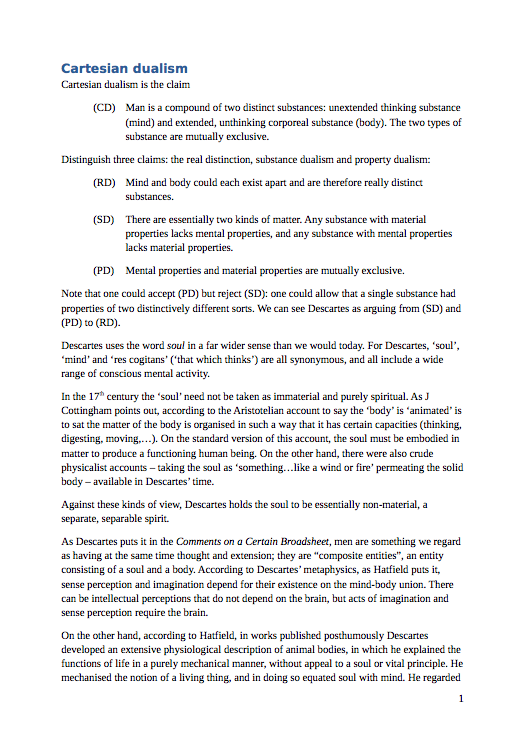 ⇒ Cartesian dualism is the claim (CD) Man is a compound of two distinct substances: unextended thinking substance (mind) and extended, unthinking corporeal substance (body). The two types of substance are mutually exclusive. Distinguish three claims: the real distinction, substance dualism and property dualism: (RD) Mind and body could each exist apart and are therefore really distinct substances. (SD) There are essentially two kinds of matter. Any substance with material properties lacks mental properties, and any substance with mental properties lacks material properties. (PD) Mental properties and material properties are mutually exclusive. Note that one could accept (PD) but reject (SD): one could allow that a single substance had properties of two distinctively different sorts. We can see Descartes as arguing from (SD) and (PD) to (RD). Descartes uses the word soul in a far wider sense than we would today. For Descartes, ‘soul’, ‘mind’ and ‘res cogitans’ (‘that which thinks’) are all synonymous, and all include a wide range of conscious mental activity. In the 17th century the ‘soul’ need not be taken as immaterial and purely spiritual. As J Cottingham points out, according to the Aristotelian account to say the ‘body’ is ‘animated’ is to sat the matter of the body is organised in such a way that it has certain capacities (thinking, digesting, moving,…). On the standard version of this account, the soul must be embodied in matter to produce a functioning human being. On the other hand, there were also crude physicalist accounts – taking the soul as ‘something…like a wind or fire’ permeating the solid body – available in Descartes’ time. Against these kinds of view, Descartes holds the soul to be essentially non-material, a separate, separable spirit. As Descartes puts it in the Comments on a Certain Broadsheet, men are something we regard as having at the same time thought and extension; they are “composite entities”, an entity consisting of a soul and a body. According to Descartes’ metaphysics, as Hatfield puts it, sense perception and imagination depend for their existence on the mind-body union. There can be intellectual perceptions that do not depend on the brain, but acts of imagination and sense perception require the brain. On the other hand, according to Hatfield, in works published posthumously Descartes developed an extensive physiological description of animal bodies, in which he explained the functions of life in a purely mechanical manner, without appeal to a soul or vital principle. He mechanised the notion of a living thing, and in doing so equated soul with mind. He regarded

Each set of notes brings together in detail all the major areas needed to write a first-class essay on the subject, with a focus on Locke, Leibniz and Descartes. Key arguments and positions from both primary and secondary sources are summarised clearly: perfect as a basis for an exam essay or as a primer on the subject.