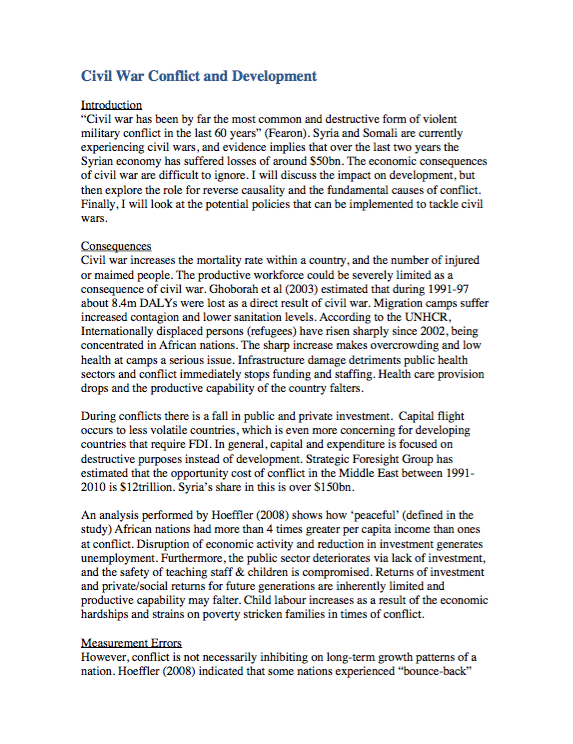 ⇒ Introduction “Civil war has been by far the most common and destructive form of violent military conflict in the last 60 years” (Fearon). Syria and Somali are currently experiencing civil wars, and evidence implies that over the last two years the Syrian economy has suffered losses of around $50bn. The economic consequences of civil war are difficult to ignore. I will discuss the impact on development, but then explore the role for reverse causality and the fundamental causes of conflict. Finally, I will look at the potential policies that can be implemented to tackle civil wars. Consequences Civil war increases the mortality rate within a country, and the number of injured or maimed people. The productive workforce could be severely limited as a consequence of civil war. Ghoborah et al (2003) estimated that during 1991-97 about 8.4m DALYs were lost as a direct result of civil war. Migration camps suffer increased contagion and lower sanitation levels. According to the UNHCR, Internationally displaced persons (refugees) have risen sharply since 2002, being concentrated in African nations. The sharp increase makes overcrowding and low health at camps a serious issue. Infrastructure damage detriments public health sectors and conflict immediately stops funding and staffing. Health care provision drops and the productive capability of the country falters. During conflicts there is a fall in public and private investment. Capital flight occurs to less volatile countries, which is even more concerning for developing countries that require FDI. In general, capital and expenditure is focused on destructive purposes instead of development. Strategic Foresight Group has estimated that the opportunity cost of conflict in the Middle East between 1991- 2010 is $12trillion. Syria’s share in this is over $150bn. An analysis performed by Hoeffler (2008) shows how ‘peaceful’ (defined in the study) African nations had more than 4 times greater per capita income than ones at conflict. Disruption of economic activity and reduction in investment generates unemployment. Furthermore, the public sector deteriorates via lack of investment, and the safety of teaching staff & children is compromised. Returns of investment and private/social returns for future generations are inherently limited and productive capability may falter. Child labour increases as a result of the economic hardships and strains on poverty stricken families in times of conflict. Measurement Errors However, conflict is not necessarily inhibiting on long-term growth patterns of a nation. Hoeffler (2008) indicated that some nations experienced “bounce-back”