Back to Marketplace | Back to Geography Notes 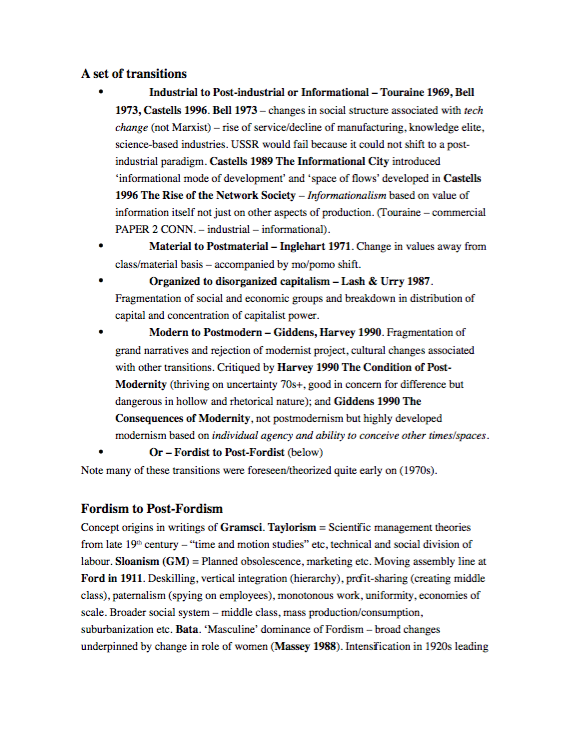 A Set of Transitions

⇒ Industrial to Post-industrial or Informational – Touraine 1969, Bell 1973, Castells 1996. Bell 1973 – changes in social structure associated with tech change (not Marxist) – rise of service/decline of manufacturing, knowledge elite, science-based industries. USSR would fail because it could not shift to a postindustrial paradigm. Castells 1989 The Informational City introduced ‘informational mode of development’ and ‘space of flows’ developed in Castells 1996 The Rise of the Network Society – Informationalism based on value of information itself not just on other aspects of production. (Touraine – commercial PAPER 2 CONN. – industrial – informational). • Material to Postmaterial – Inglehart 1971. Change in values away from class/material basis – accompanied by mo/pomo shift. • Organized to disorganized capitalism – Lash & Urry 1987. Fragmentation of social and economic groups and breakdown in distribution of capital and concentration of capitalist power. • Modern to Postmodern – Giddens, Harvey 1990. Fragmentation of grand narratives and rejection of modernist project, cultural changes associated with other transitions. Critiqued by Harvey 1990 The Condition of PostModernity (thriving on uncertainty 70s+, good in concern for difference but dangerous in hollow and rhetorical nature); and Giddens 1990 The Consequences of Modernity, not postmodernism but highly developed modernism based on individual agency and ability to conceive other times/spaces. • Or – Fordist to Post-Fordist (below) Note many of these transitions were foreseen/theorized quite early on (1970s). Fordism to Post-Fordism Concept origins in writings of Gramsci. Taylorism = Scientific management theories from late 19th century – “time and motion studies” etc, technical and social division of labour. Sloanism (GM) = Planned obsolescence, marketing etc. Moving assembly line at Ford in 1911. Deskilling, vertical integration (hierarchy), profit-sharing (creating middle class), paternalism (spying on employees), monotonous work, uniformity, economies of scale. Broader social system – middle class, mass production/consumption, suburbanization etc. Bata. ‘Masculine’ dominance of Fordism – broad changes underpinned by change in role of women (Massey 1988). Intensification in 1920s leading

The material covers much of economic geography from the broad themes of the changing economy to knowledge and creativity, innovation, labor markets, culture, and inequality. The package includes: 5 supervision essays; Over 20, 000 words of notes from reading, organised by theme; Some concise revision notes on general economic geography topics; A list of useful references to remember.