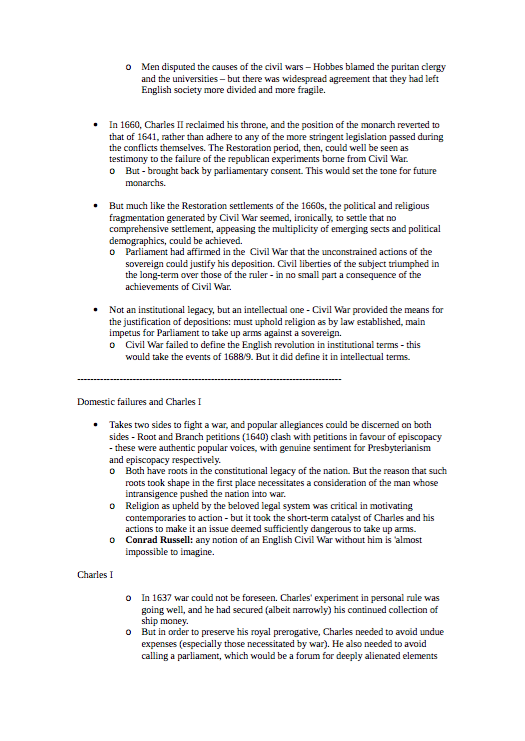 ⇒ Men disputed the causes of the civil wars – Hobbes blamed the puritan clergy and the universities – but there was widespread agreement that they had left English society more divided and more fragile.  In 1660, Charles II reclaimed his throne, and the position of the monarch reverted to that of 1641, rather than adhere to any of the more stringent legislation passed during the conflicts themselves. The Restoration period, then, could well be seen as testimony to the failure of the republican experiments borne from Civil War. o But - brought back by parliamentary consent. This would set the tone for future monarchs.  But much like the Restoration settlements of the 1660s, the political and religious fragmentation generated by Civil War seemed, ironically, to settle that no comprehensive settlement, appeasing the multiplicity of emerging sects and political demographics, could be achieved. o Parliament had affirmed in the Civil War that the unconstrained actions of the sovereign could justify his deposition. Civil liberties of the subject triumphed in the long-term over those of the ruler - in no small part a consequence of the achievements of Civil War.  Not an institutional legacy, but an intellectual one - Civil War provided the means for the justification of depositions: must uphold religion as by law established, main impetus for Parliament to take up arms against a sovereign. o Civil War failed to define the English revolution in institutional terms - this would take the events of 1688/9. But it did define it in intellectual terms. --------------------------------------------------------------------------------- Domestic failures and Charles I  Takes two sides to fight a war, and popular allegiances could be discerned on both sides - Root and Branch petitions (1640) clash with petitions in favour of episcopacy - these were authentic popular voices, with genuine sentiment for Presbyterianism and episcopacy respectively. o Both have roots in the constitutional legacy of the nation. But the reason that such roots took shape in the first place necessitates a consideration of the man whose intransigence pushed the nation into war. o Religion as upheld by the beloved legal system was critical in motivating contemporaries to action - but it took the short-term catalyst of Charles and his actions to make it an issue deemed sufficiently dangerous to take up arms. o Conrad Russell: any notion of an English Civil War without him is 'almost impossible to imagine. Charles I o In 1637 war could not be foreseen. Charles' experiment in personal rule was going well, and he had secured (albeit narrowly) his continued collection of ship money. o But in order to preserve his royal prerogative, Charles needed to avoid undue expenses (especially those necessitated by war). He also needed to avoid calling a parliament, which would be a forum for deeply alienated elements

These notes focus on the Civil War, popular politics, the Early Reformation and politics and religion in the post-Restoration period.