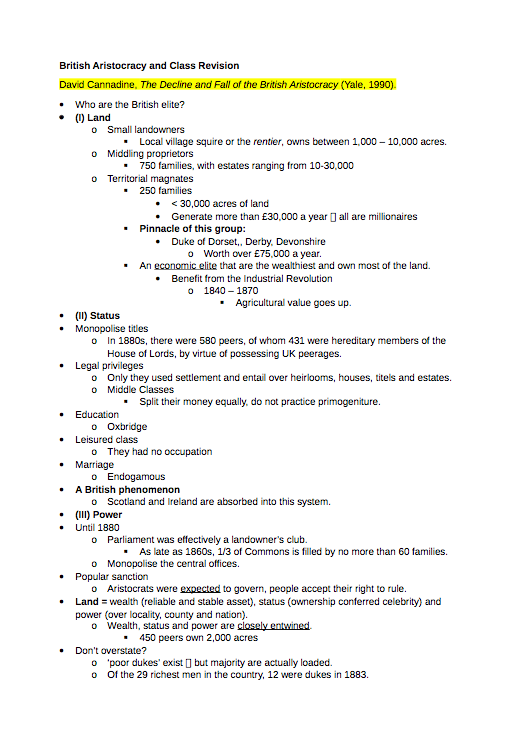 ⇒ Who are the British elite?  (I) Land o Small landowners  Local village squire or the rentier, owns between 1,000 – 10,000 acres. o Middling proprietors  750 families, with estates ranging from 10-30,000 o Territorial magnates  250 families  < 30,000 acres of land  Generate more than £30,000 a year  all are millionaires  Pinnacle of this group:  Duke of Dorset,, Derby, Devonshire o Worth over £75,000 a year.  An economic elite that are the wealthiest and own most of the land.  Benefit from the Industrial Revolution o 1840 – 1870  Agricultural value goes up.  (II) Status  Monopolise titles o In 1880s, there were 580 peers, of whom 431 were hereditary members of the House of Lords, by virtue of possessing UK peerages.  Legal privileges o Only they used settlement and entail over heirlooms, houses, titels and estates. o Middle Classes  Split their money equally, do not practice primogeniture.  Education o Oxbridge  Leisured class o They had no occupation  Marriage o Endogamous  A British phenomenon o Scotland and Ireland are absorbed into this system.  (III) Power  Until 1880 o Parliament was effectively a landowner’s club.  As late as 1860s, 1/3 of Commons is filled by no more than 60 families. o Monopolise the central offices.  Popular sanction o Aristocrats were expected to govern, people accept their right to rule.  Land = wealth (reliable and stable asset), status (ownership conferred celebrity) and power (over locality, county and nation). o Wealth, status and power are closely entwined.  450 peers own 2,000 acres  Don’t overstate? o ‘poor dukes’ exist  but majority are actually loaded. o Of the 29 richest men in the country, 12 were dukes in 1883.

A thorough, yet easy-to-read, body of notes for 19th Century British History. Particular emphasis is on Gladstone and the Liberal Party, the British Empire, Class and Gender History. This pack is filled with interesting and little-known historical facts that can really impress examiners looking to award First Class papers! The author was awarded 73% for this module - one of the highest marks for their year group - thanks to these notes.