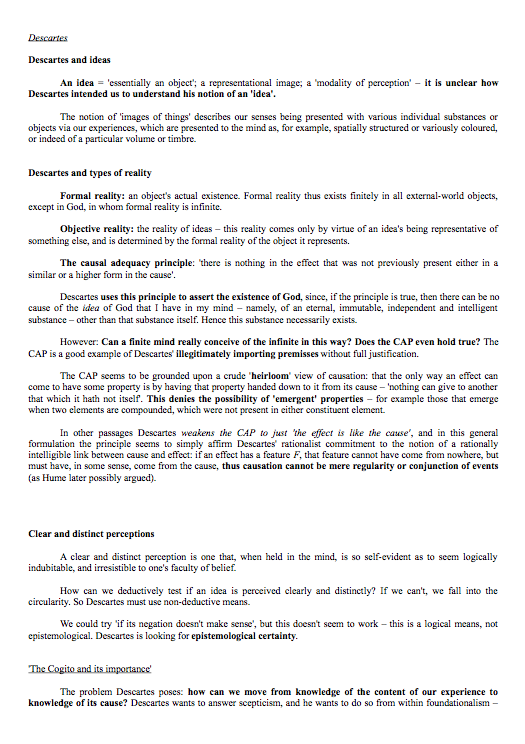 ⇒ Descartes and ideas An idea = 'essentially an object'; a representational image; a 'modality of perception' – it is unclear how Descartes intended us to understand his notion of an 'idea'. The notion of 'images of things' describes our senses being presented with various individual substances or objects via our experiences, which are presented to the mind as, for example, spatially structured or variously coloured, or indeed of a particular volume or timbre. Descartes and types of reality Formal reality: an object's actual existence. Formal reality thus exists finitely in all external-world objects, except in God, in whom formal reality is infinite. Objective reality: the reality of ideas – this reality comes only by virtue of an idea's being representative of something else, and is determined by the formal reality of the object it represents. The causal adequacy principle: 'there is nothing in the effect that was not previously present either in a similar or a higher form in the cause'. Descartes uses this principle to assert the existence of God, since, if the principle is true, then there can be no cause of the idea of God that I have in my mind – namely, of an eternal, immutable, independent and intelligent substance – other than that substance itself. Hence this substance necessarily exists. However: Can a finite mind really conceive of the infinite in this way? Does the CAP even hold true? The CAP is a good example of Descartes' illegitimately importing premisses without full justification. The CAP seems to be grounded upon a crude 'heirloom' view of causation: that the only way an effect can come to have some property is by having that property handed down to it from its cause – 'nothing can give to another that which it hath not itself'. This denies the possibility of 'emergent' properties – for example those that emerge when two elements are compounded, which were not present in either constituent element. In other passages Descartes weakens the CAP to just 'the effect is like the cause', and in this general formulation the principle seems to simply affirm Descartes' rationalist commitment to the notion of a rationally intelligible link between cause and effect: if an effect has a feature F, that feature cannot have come from nowhere, but must have, in some sense, come from the cause, thus causation cannot be mere regularity or conjunction of events (as Hume later possibly argued). Clear and distinct perceptions A clear and distinct perception is one that, when held in the mind, is so self-evident as to seem logically indubitable, and irresistible to one's faculty of belief. How can we deductively test if an idea is perceived clearly and distinctly? If we can't, we fall into the circularity. So Descartes must use non-deductive means. We could try 'if its negation doesn't make sense', but this doesn't seem to work – this is a logical means, not epistemological. Descartes is looking for epistemological certainty. 'The Cogito and its importance' The problem Descartes poses: how can we move from knowledge of the content of our experience to knowledge of its cause? Descartes wants to answer scepticism, and he wants to do so from within foundationalism –

Three sets of collected notes on Descartes, Hume, and Locke and Berkeley (between 3000 and 6000 words). 7 tutorial essays on topics in Descartes, Locke and Hume (all around 2000-3000 words). All notes are written in full and clear sentences, with relevant important sections and comments highlighted. Author received consistent mid to high 2.1s for the essays as submitted in their present form, and a 1st in the final exam on the strength of these revision notes.