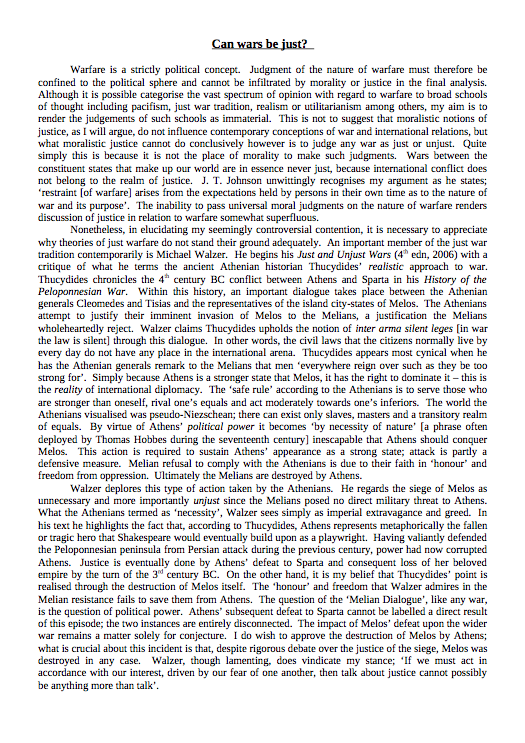 Can wars be just?

⇒ Warfare is a strictly political concept. Judgment of the nature of warfare must therefore be confined to the political sphere and cannot be infiltrated by morality or justice in the final analysis. Although it is possible categorise the vast spectrum of opinion with regard to warfare to broad schools of thought including pacifism, just war tradition, realism or utilitarianism among others, my aim is to render the judgements of such schools as immaterial. This is not to suggest that moralistic notions of justice, as I will argue, do not influence contemporary conceptions of war and international relations, but what moralistic justice cannot do conclusively however is to judge any war as just or unjust. Quite simply this is because it is not the place of morality to make such judgments. Wars between the constituent states that make up our world are in essence never just, because international conflict does not belong to the realm of justice. J. T. Johnson unwittingly recognises my argument as he states; ‘restraint [of warfare] arises from the expectations held by persons in their own time as to the nature of war and its purpose’. The inability to pass universal moral judgments on the nature of warfare renders discussion of justice in relation to warfare somewhat superfluous. Nonetheless, in elucidating my seemingly controversial contention, it is necessary to appreciate why theories of just warfare do not stand their ground adequately. An important member of the just war tradition contemporarily is Michael Walzer. He begins his Just and Unjust Wars (4th edn, 2006) with a critique of what he terms the ancient Athenian historian Thucydides’ realistic approach to war. Thucydides chronicles the 4th century BC conflict between Athens and Sparta in his History of the Peloponnesian War. Within this history, an important dialogue takes place between the Athenian generals Cleomedes and Tisias and the representatives of the island city-states of Melos. The Athenians attempt to justify their imminent invasion of Melos to the Melians, a justification the Melians wholeheartedly reject. Walzer claims Thucydides upholds the notion of inter arma silent leges [in war the law is silent] through this dialogue. In other words, the civil laws that the citizens normally live by every day do not have any place in the international arena. Thucydides appears most cynical when he has the Athenian generals remark to the Melians that men ‘everywhere reign over such as they be too strong for’. Simply because Athens is a stronger state that Melos, it has the right to dominate it – this is the reality of international diplomacy. The ‘safe rule’ according to the Athenians is to serve those who are stronger than oneself, rival one’s equals and act moderately towards one’s inferiors. The world the Athenians visualised was pseudo-Niezschean; there can exist only slaves, masters and a transitory realm of equals. By virtue of Athens’ political power it becomes ‘by necessity of nature’ [a phrase often deployed by Thomas Hobbes during the seventeenth century] inescapable that Athens should conquer Melos. This action is required to sustain Athens’ appearance as a strong state; attack is partly a defensive measure. Melian refusal to comply with the Athenians is due to their faith in ‘honour’ and freedom from oppression. Ultimately the Melians are destroyed by Athens. Walzer deplores this type of action taken by the Athenians. He regards the siege of Melos as unnecessary and more importantly unjust since the Melians posed no direct military threat to Athens. What the Athenians termed as ‘necessity’, Walzer sees simply as imperial extravagance and greed. In his text he highlights the fact that, according to Thucydides, Athens represents metaphorically the fallen or tragic hero that Shakespeare would eventually build upon as a playwright. Having valiantly defended the Peloponnesian peninsula from Persian attack during the previous century, power had now corrupted Athens. Justice is eventually done by Athens’ defeat to Sparta and consequent loss of her beloved empire by the turn of the 3rd century BC. On the other hand, it is my belief that Thucydides’ point is realised through the destruction of Melos itself. The ‘honour’ and freedom that Walzer admires in the Melian resistance fails to save them from Athens. The question of the ‘Melian Dialogue’, like any war, is the question of political power. Athens’ subsequent defeat to Sparta cannot be labelled a direct result of this episode; the two instances are entirely disconnected. The impact of Melos’ defeat upon the wider war remains a matter solely for conjecture. I do wish to approve the destruction of Melos by Athens; what is crucial about this incident is that, despite rigorous debate over the justice of the siege, Melos was destroyed in any case. Walzer, though lamenting, does vindicate my stance; ‘If we must act in accordance with our interest, driven by our fear of one another, then talk about justice cannot possibly be anything more than talk’.

Collection of essays prepared for the History or Social and Political Sciences Tripos Part IIat the University of Cambridge. The essays mostly to focus on the political theory developed by particular influential thinkers. Some of the essays also discuss abstract elements of political philosophy. Topics include: Max Weber; Carl Schmitt; Friedrich Nietzsche; Eduard Berstein; The State; Political Authority and Obligation; and International Relations and War.