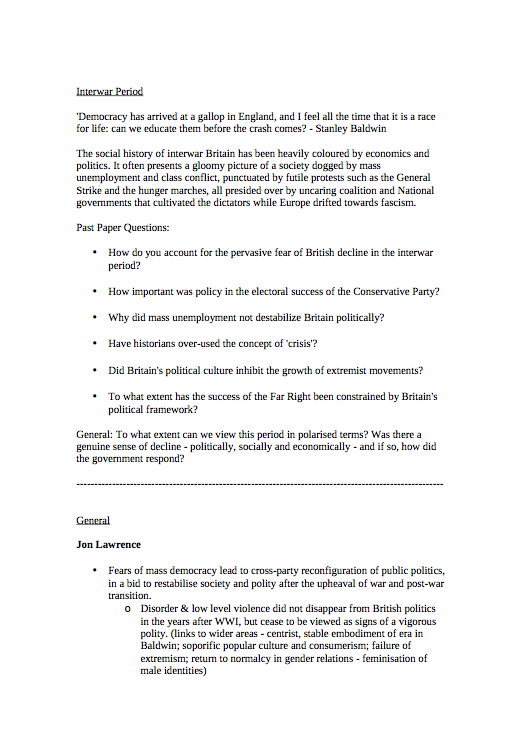 ⇒ 'Democracy has arrived at a gallop in England, and I feel all the time that it is a race for life: can we educate them before the crash comes? - Stanley Baldwin The social history of interwar Britain has been heavily coloured by economics and politics. It often presents a gloomy picture of a society dogged by mass unemployment and class conflict, punctuated by futile protests such as the General Strike and the hunger marches, all presided over by uncaring coalition and National governments that cultivated the dictators while Europe drifted towards fascism. Past Paper Questions: • How do you account for the pervasive fear of British decline in the interwar period? • How important was policy in the electoral success of the Conservative Party? • Why did mass unemployment not destabilize Britain politically? • Have historians over-used the concept of 'crisis'? • Did Britain's political culture inhibit the growth of extremist movements? • To what extent has the success of the Far Right been constrained by Britain's political framework? General: To what extent can we view this period in polarised terms? Was there a genuine sense of decline - politically, socially and economically - and if so, how did the government respond? ------------------------------------------------------------------------------------------------------- General Jon Lawrence • Fears of mass democracy lead to cross-party reconfiguration of public politics, in a bid to restabilise society and polity after the upheaval of war and post-war transition. o Disorder & low level violence did not disappear from British politics in the years after WWI, but cease to be viewed as signs of a vigorous polity. (links to wider areas - centrist, stable embodiment of era in Baldwin; soporific popular culture and consumerism; failure of extremism; return to normalcy in gender relations - feminisation of male identities)