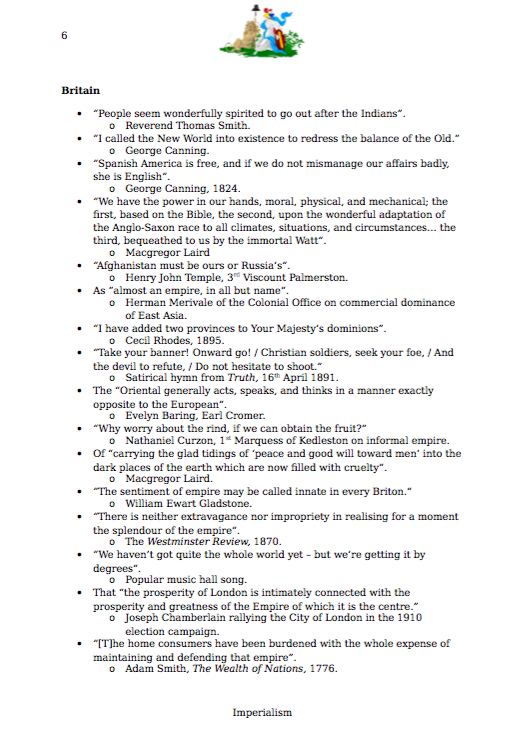 ⇒  “People seem wonderfully spirited to go out after the Indians”. o Reverend Thomas Smith.  “I called the New World into existence to redress the balance of the Old.” o George Canning.  “Spanish America is free, and if we do not mismanage our affairs badly, she is English”. o George Canning, 1824.  “We have the power in our hands, moral, physical, and mechanical; the first, based on the Bible, the second, upon the wonderful adaptation of the Anglo-Saxon race to all climates, situations, and circumstances… the third, bequeathed to us by the immortal Watt”. o Macgregor Laird  “Afghanistan must be ours or Russia’s”. o Henry John Temple, 3rd Viscount Palmerston.  As “almost an empire, in all but name”. o Herman Merivale of the Colonial Office on commercial dominance of East Asia.  “I have added two provinces to Your Majesty’s dominions”. o Cecil Rhodes, 1895.  “Take your banner! Onward go! / Christian soldiers, seek your foe, / And the devil to refute, / Do not hesitate to shoot.” o Satirical hymn from Truth, 16th April 1891.  The “Oriental generally acts, speaks, and thinks in a manner exactly opposite to the European”. o Evelyn Baring, Earl Cromer.  “Why worry about the rind, if we can obtain the fruit?” o Nathaniel Curzon, 1st Marquess of Kedleston on informal empire.  Of “carrying the glad tidings of ‘peace and good will toward men’ into the dark places of the earth which are now filled with cruelty”. o Macgregor Laird.  “The sentiment of empire may be called innate in every Briton.” o William Ewart Gladstone.  “There is neither extravagance nor impropriety in realising for a moment the splendour of the empire”. o The Westminster Review, 1870.  “We haven’t got quite the whole world yet – but we’re getting it by degrees”. o Popular music hall song.  That “the prosperity of London is intimately connected with the prosperity and greatness of the Empire of which it is the centre.” o Joseph Chamberlain rallying the City of London in the 1910 election campaign.  “[T]he home consumers have been burdened with the whole expense of maintaining and defending that empire”. o Adam Smith, The Wealth of Nations, 1776.

These notes tackle the concept of imperialism - what is an empire, how have historians explained them, why do they rise, stagnate, and fall. As well as comparing how great imperial thinkers - Marx, Hobhouse, Schumpeter and many others - have written about imperialism, they look in detail at five practical examples - the British Empire, the Napoleonic Empire, the Belgian Empire, and the Austrian Empire. Complete with quotes, maps, and timelines.