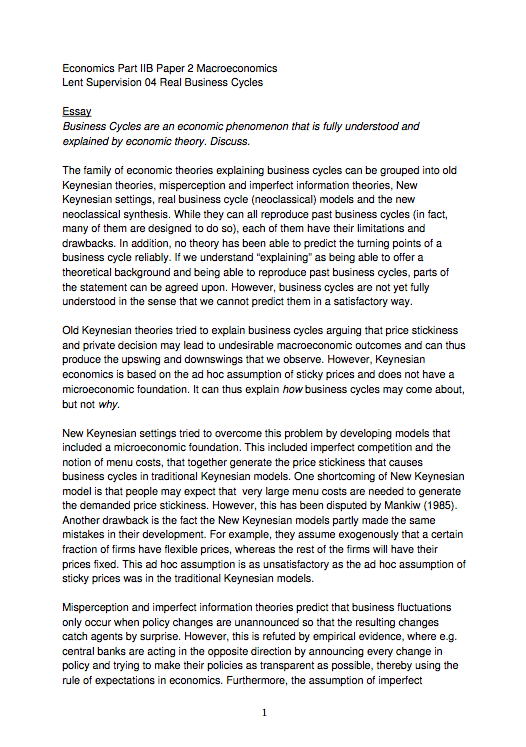 ⇒ Business Cycles are an economic phenomenon that is fully understood and explained by economic theory. Discuss. The family of economic theories explaining business cycles can be grouped into old Keynesian theories, misperception and imperfect information theories, New Keynesian settings, real business cycle (neoclassical) models and the new neoclassical synthesis. While they can all reproduce past business cycles (in fact, many of them are designed to do so), each of them have their limitations and drawbacks. In addition, no theory has been able to predict the turning points of a business cycle reliably. If we understand “explaining” as being able to offer a theoretical background and being able to reproduce past business cycles, parts of the statement can be agreed upon. However, business cycles are not yet fully understood in the sense that we cannot predict them in a satisfactory way. Old Keynesian theories tried to explain business cycles arguing that price stickiness and private decision may lead to undesirable macroeconomic outcomes and can thus produce the upswing and downswings that we observe. However, Keynesian economics is based on the ad hoc assumption of sticky prices and does not have a microeconomic foundation. It can thus explain how business cycles may come about, but not why. New Keynesian settings tried to overcome this problem by developing models that included a microeconomic foundation. This included imperfect competition and the notion of menu costs, that together generate the price stickiness that causes business cycles in traditional Keynesian models. One shortcoming of New Keynesian model is that people may expect that very large menu costs are needed to generate the demanded price stickiness. However, this has been disputed by Mankiw (1985). Another drawback is the fact the New Keynesian models partly made the same mistakes in their development. For example, they assume exogenously that a certain fraction of firms have flexible prices, whereas the rest of the firms will have their prices fixed. This ad hoc assumption is as unsatisfactory as the ad hoc assumption of sticky prices was in the traditional Keynesian models. Misperception and imperfect information theories predict that business fluctuations only occur when policy changes are unannounced so that the resulting changes catch agents by surprise. However, this is refuted by empirical evidence, where e.g. central banks are acting in the opposite direction by announcing every change in policy and trying to make their policies as transparent as possible, thereby using the rule of expectations in economics. Furthermore, the assumption of imperfect

These are the essays in macroeconomics written in the 2nd and 3rd year at Cambridge. They were part of supervision assignments, are usually of 1000-1500 words in length and are of a first class standard. Topics include business cycle theory, monetary policy and unemployment.