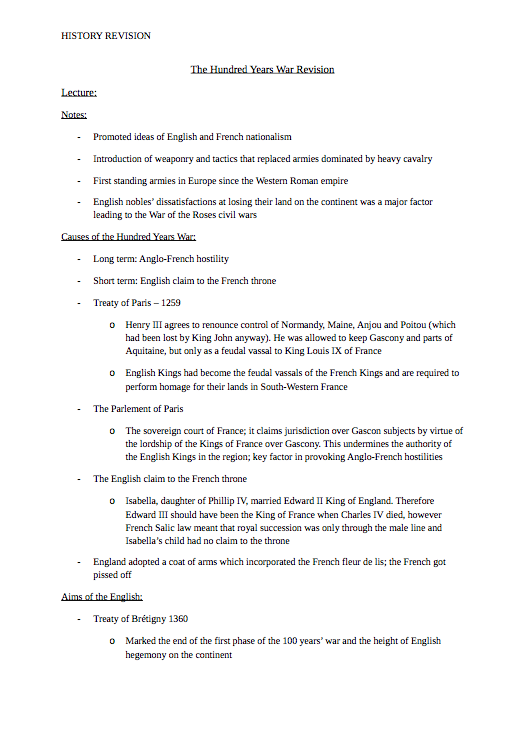 ⇒ Notes: - Promoted ideas of English and French nationalism - Introduction of weaponry and tactics that replaced armies dominated by heavy cavalry - First standing armies in Europe since the Western Roman empire - English nobles’ dissatisfactions at losing their land on the continent was a major factor leading to the War of the Roses civil wars Causes of the Hundred Years War: - Long term: Anglo-French hostility - Short term: English claim to the French throne - Treaty of Paris – 1259 o Henry III agrees to renounce control of Normandy, Maine, Anjou and Poitou (which had been lost by King John anyway). He was allowed to keep Gascony and parts of Aquitaine, but only as a feudal vassal to King Louis IX of France o English Kings had become the feudal vassals of the French Kings and are required to perform homage for their lands in South-Western France - The Parlement of Paris o The sovereign court of France; it claims jurisdiction over Gascon subjects by virtue of the lordship of the Kings of France over Gascony. This undermines the authority of the English Kings in the region; key factor in provoking Anglo-French hostilities - The English claim to the French throne o Isabella, daughter of Phillip IV, married Edward II King of England. Therefore Edward III should have been the King of France when Charles IV died, however French Salic law meant that royal succession was only through the male line and Isabella’s child had no claim to the throne - England adopted a coat of arms which incorporated the French fleur de lis; the French got pissed off Aims of the English: - Treaty of Brétigny 1360 o Marked the end of the first phase of the 100 years’ war and the height of English hegemony on the continent

Notes detailing the causes of the war alongside two sections detailing the aims of the English and why they felt justified in invading France. Scrupulous section regarding the superiority of the English tactics and important victories followed by a section underlining the importance of Joan of Arc for the French. Thorough introductory notes to the Third Crusade alongside sections each devoted to important individual events throughout the war, from the failure of Barbarossa to the Battle of Arsuf. Detailed historiographical interpretations with names and two brief primary source analyses.