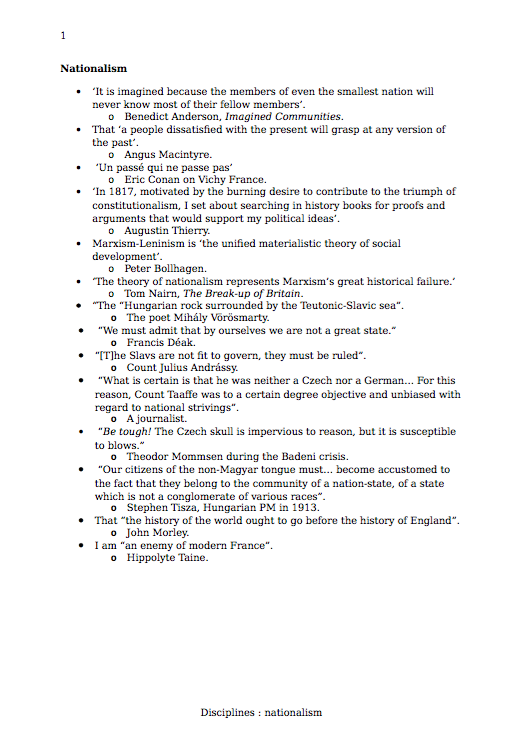 ⇒ ‘It is imagined because the members of even the smallest nation will never know most of their fellow members’. o Benedict Anderson, Imagined Communities.  That ‘a people dissatisfied with the present will grasp at any version of the past’. o Angus Macintyre.  ‘Un passé qui ne passe pas’ o Eric Conan on Vichy France.  ‘In 1817, motivated by the burning desire to contribute to the triumph of constitutionalism, I set about searching in history books for proofs and arguments that would support my political ideas’. o Augustin Thierry.  Marxism-Leninism is ‘the unified materialistic theory of social development’. o Peter Bollhagen.  ‘The theory of nationalism represents Marxism’s great historical failure.’ o Tom Nairn, The Break-up of Britain.  “The “Hungarian rock surrounded by the Teutonic-Slavic sea”. o The poet Mihály Vörösmarty.  “We must admit that by ourselves we are not a great state.” o Francis Déak.  “[T]he Slavs are not fit to govern, they must be ruled”. o Count Julius Andrássy.  “What is certain is that he was neither a Czech nor a German… For this reason, Count Taaffe was to a certain degree objective and unbiased with regard to national strivings”. o A journalist.  “Be tough! The Czech skull is impervious to reason, but it is susceptible to blows.” o Theodor Mommsen during the Badeni crisis.  “Our citizens of the non-Magyar tongue must… become accustomed to the fact that they belong to the community of a nation-state, of a state which is not a conglomerate of various races”. o Stephen Tisza, Hungarian PM in 1913.  That “the history of the world ought to go before the history of England”. o John Morley.  I am “an enemy of modern France”. o Hippolyte Taine.

Brief notes on the concept of nationalism and the idea of a national history.