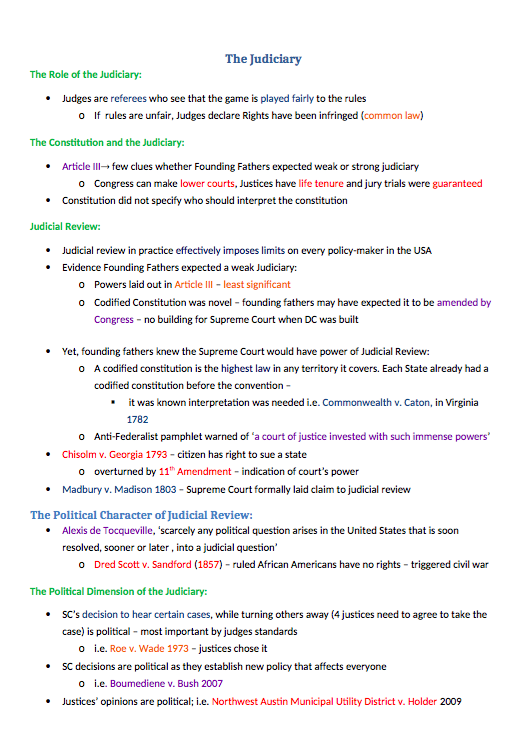 ⇒ The Role of the Judiciary:  Judges are referees who see that the game is played fairly to the rules o If rules are unfair, Judges declare Rights have been infringed (common law) The Constitution and the Judiciary:  Article III few clues whether Founding Fathers expected weak or strong judiciary o Congress can make lower courts, Justices have life tenure and jury trials were guaranteed  Constitution did not specify who should interpret the constitution Judicial Review:  Judicial review in practice effectively imposes limits on every policy-maker in the USA  Evidence Founding Fathers expected a weak Judiciary: o Powers laid out in Article III – least significant o Codified Constitution was novel – founding fathers may have expected it to be amended by Congress – no building for Supreme Court when DC was built  Yet, founding fathers knew the Supreme Court would have power of Judicial Review: o A codified constitution is the highest law in any territory it covers. Each State already had a codified constitution before the convention –  it was known interpretation was needed i.e. Commonwealth v. Caton, in Virginia 1782 o Anti-Federalist pamphlet warned of ‘a court of justice invested with such immense powers’  Chisolm v. Georgia 1793 – citizen has right to sue a state o overturned by 11th Amendment – indication of court’s power  Madbury v. Madison 1803 – Supreme Court formally laid claim to judicial review The Political Character of Judicial Review:  Alexis de Tocqueville, ‘scarcely any political question arises in the United States that is soon resolved, sooner or later , into a judicial question’ o Dred Scott v. Sandford (1857) – ruled African Americans have no rights – triggered civil war The Political Dimension of the Judiciary:  SC’s decision to hear certain cases, while turning others away (4 justices need to agree to take the case) is political – most important by judges standards o i.e. Roe v. Wade 1973 – justices chose it  SC decisions are political as they establish new policy that affects everyone o i.e. Boumediene v. Bush 2007  Justices’ opinions are political; i.e. Northwest Austin Municipal Utility District v. Holder 2009

A2 Edexcel Politics, Unit 4 (US) notes. - grade A. These notes provide detailed information on all 4 major topics: congress, constitution, judiciary and Presidenccy. They are a combination of class notes, research and textbook notes from Anthony Bennet's US Government and Politics and William Storey's US Government and Politics. The notes are full of up to date (2014) examples which have been highlighted to make them easier to memorise. Also included are for and against arguments for some of the core questions in US politics, for example, 'Are there too many checks on congress?'