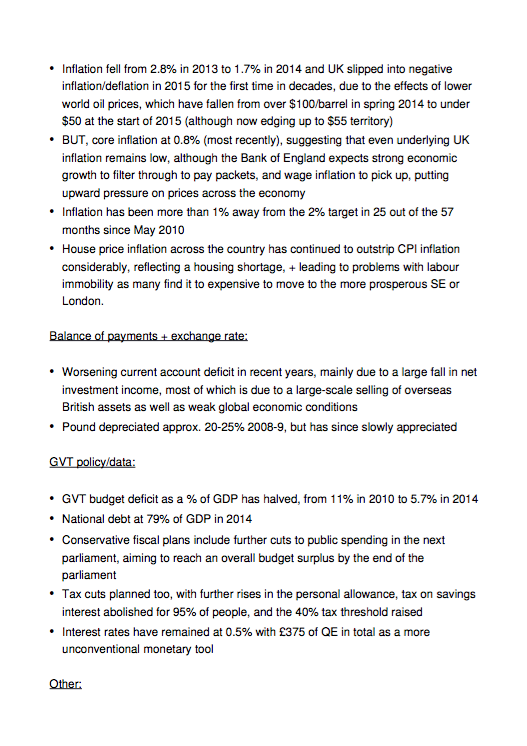 ⇒ Inflation fell from 2.8% in 2013 to 1.7% in 2014 and UK slipped into negative inflation/deflation in 2015 for the first time in decades, due to the effects of lower world oil prices, which have fallen from over $100/barrel in spring 2014 to under $50 at the start of 2015 (although now edging up to $55 territory) • BUT, core inflation at 0.8% (most recently), suggesting that even underlying UK inflation remains low, although the Bank of England expects strong economic growth to filter through to pay packets, and wage inflation to pick up, putting upward pressure on prices across the economy • Inflation has been more than 1% away from the 2% target in 25 out of the 57 months since May 2010 • House price inflation across the country has continued to outstrip CPI inflation considerably, reflecting a housing shortage, + leading to problems with labour immobility as many find it to expensive to move to the more prosperous SE or London. Balance of payments + exchange rate: • Worsening current account deficit in recent years, mainly due to a large fall in net investment income, most of which is due to a large­scale selling of overseas British assets as well as weak global economic conditions • Pound depreciated approx. 20­25% 2008­9, but has since slowly appreciated GVT policy/data: • GVT budget deficit as a % of GDP has halved, from 11% in 2010 to 5.7% in 2014 • National debt at 79% of GDP in 2014 • Conservative fiscal plans include further cuts to public spending in the next parliament, aiming to reach an overall budget surplus by the end of the parliament • Tax cuts planned too, with further rises in the personal allowance, tax on savings interest abolished for 95% of people, and the 40% tax threshold raised • Interest rates have remained at 0.5% with £375 of QE in total as a more unconventional monetary tool

Comprehensive notes covering the whole AQA A2 economics course, both units 3 and 4 (micro and macro). Notes tailor made to the AQA A-Level Economics course. But, content applicable to all exam boards. Notes are in a concise, bullet point format, which is easy to read, yet the notes also contain all the information needed to get 100% and full UMS marks.