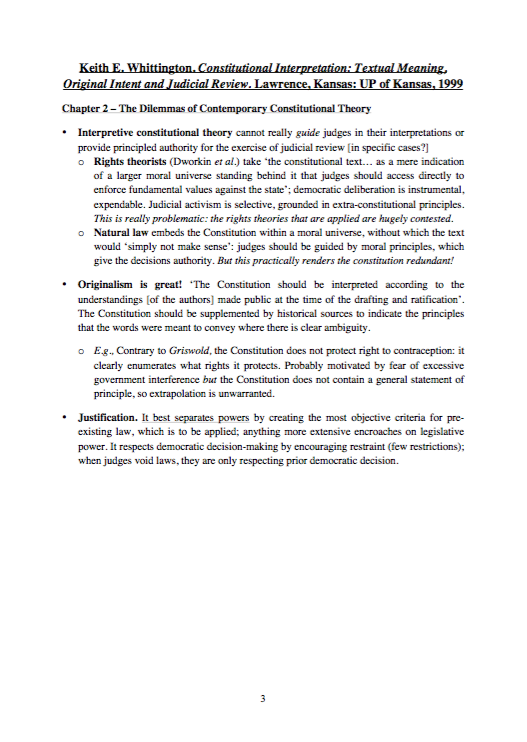 ⇒ Interpretive constitutional theory cannot really guide judges in their interpretations or provide principled authority for the exercise of judicial review [in specific cases?] o Rights theorists (Dworkin et al.) take ‘the constitutional text… as a mere indication of a larger moral universe standing behind it that judges should access directly to enforce fundamental values against the state’; democratic deliberation is instrumental, expendable. Judicial activism is selective, grounded in extra-constitutional principles. This is really problematic: the rights theories that are applied are hugely contested. o Natural law embeds the Constitution within a moral universe, without which the text would ‘simply not make sense’: judges should be guided by moral principles, which give the decisions authority. But this practically renders the constitution redundant! • Originalism is great! ‘The Constitution should be interpreted according to the understandings [of the authors] made public at the time of the drafting and ratification’. The Constitution should be supplemented by historical sources to indicate the principles that the words were meant to convey where there is clear ambiguity. o E.g., Contrary to Griswold, the Constitution does not protect right to contraception: it clearly enumerates what rights it protects. Probably motivated by fear of excessive government interference but the Constitution does not contain a general statement of principle, so extrapolation is unwarranted. • Justification. It best separates powers by creating the most objective criteria for preexisting law, which is to be applied; anything more extensive encroaches on legislative power. It respects democratic decision-making by encouraging restraint (few restrictions); when judges void laws, they are only respecting prior democratic decision.

Keith E. Whittington. Constitutional Interpretation: Textual Meaning, Original Intent and Judicial Review. Lawrence, Kansas: University Press of Kansas, 1999. John Hart Ely. Democracy and Distrust: A Theory of Judicial Review. Cambridge, MA: Harvard UP, 1980. Robert H. Bork. The Tempting of America: The Political Seduction of the Law. New York: The Free Press, 1990. Sanford Levinson. Why I Do Not Teach Marbury (Except to Eastern Europeans) and Why You Shouldn’t Either.. Sanford Levinson. Why I Still Won’t Teach Marbury (Except in a Seminar). AEI-Brookings Continuity of Government Commission. Continuity of Congress: Where We Are Eight Years after 9/11